The Strange and Terrifying Case of the Turboslav Empire

I have been putting off writing this article for quite a while now. The reasons were many: there was the IMC of course (and a lot has happened there). There was ISAS (and all that happened there too). But here we are. The Turboslavs. Buckle up, folks!1

A long, long time ago in a galaxy far away…

…no, wait. Not that long ago and not that far away. Actually around 2014. A weird trend started to appear in the Polish blogosphere. A bunch of people began to write about the semi-mythical “Empire of the Sarmatians” that stretched from the Rhine to Novgorod. Sort of Erich von Däniken (and yes, aliens do make an appearance) with a Slavic take. The internet is full of such nonsense, right? Nothing to worry about, right? Well…

In 2015, a well-known and respected publishing house in Poland, Bellona (previously mostly dealing in popular history books - they are a bit of an institution in that respect) published a book titled “The Slavic Kings of Lechia” by Janusz Bieszk. Sounds suspicious already at the first glance. Open it and it reveals a pandemonium.

According to Bieszk, Poland did not start off with the Christianization in 966 CE. In “reality,” it all started 70.000 years ago with the great empire of Gobi, run by Aryan-Slavic people. A great and powerful nation that believed in the only true religion. What religion was that, you may ask? Well, that is very simple: Arianism, since they were Aryan!2. From then on it gets even better. Our heroes wander west and there they found the great empire of Lechia. Somewhere between 70.000 BCE and 200 CE they become Slavs (how do they lose the Aryan part has not been very clearly explained, but with it goes also Arianism. Sniff.)

The empire of Lechia rules everything east and north of the Rhine and the Danube. It is doing just splendidly. Fights with Rome but at the same time stays in kind of a weird equilibrium with it. Taking advantage of Rome’s weakness, it just well, colonizes North Africa3. 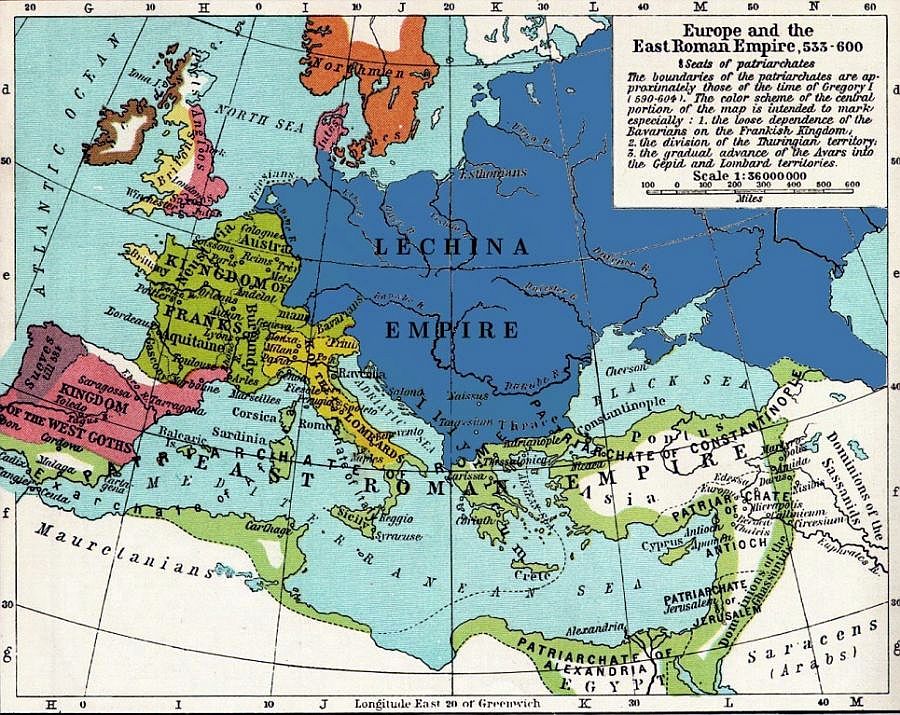 Everything runs smoothly. Lechia grows in power and strength (with a little bit of hiccups along the way, otherwise it would not be believable, would it?) until the great and powerful but also naive Mieszko. Mieszko, being unaware what it means, converts to Roman Christianity (Orthodox Christianity was already present in Lechia and was a good thing, as it represented an embodiment of the Slavic spirit), and gives his empire under the protection of the Holy Roman Empire, in other words the Germans! The rest, let me quote one of the blogs, “is well known from the short and pleasant history books that the German teachers have written for us”. The adherents of that myth came to be known as the Turboslavs

Bieszk and other “Turboslavs” maintain that it is all very much grounded in the sources. They derive their theories from the so-called Chronicle of Prokosz. “Discovered” in the early 19th century, it’s a 18th century forgery that has been debunked as such… a year after it was published. But its very existence gives an argument to Turboslavs. Here you have it: fake news, the medieval history edition. Everything is framed as “uncovering the truth” and, if I may be allowed a literal translation, “de-lying” history. For history, you must know, has been stolen from Polish people. Historiography is just another tool through which enemies oppress Poland by stealing its history from it (a note very much present in the current government’s narration).

Therefore, everything that the Turboslavs write is put into a disguise of real historical research. There is source critique, maps, manuscript studies, everything. To an untrained eye authors like Bieszk or Feliks Gruszka (who claims to have discovered the Slavic alphabet) seem like fully fledged historians. Bieszk in his YouTube videos can even be critical to his own theories and talk about “things that still need to be researched”. That adds credibility.

It is mostly a “pick and choose” exercise that relies heavily on using one set of sources (mostly completely discredited) and ignoring everything else. Debunking has been done extensively on the internet and in the written media (well, it does not require much effort; virtually all archaeological and historical evidence disproves Lechia), but it does not convince the faithful.

An origin myth for our times

One may ask how come this can hold water? The whole Turboslavic ideology is so absurd and so easily proven wrong that it makes no sense that it can still exist. Well yes and… no.

It is a modern origin myth. Origin myths have never been made to reflect actual history. They are a mix of memories, nostalgia and aspirations (maybe also fears?). The memory of more recent past, as we shall see, plays a significant role in the way this particular one developed.4

Therefore it does not really matter that a smartass historian like me comes and says “Hey! It wasn’t like that! Here are the sources, if I can only use a moment of your time…” “Liberal truth” for followers of Turboslavism is essentially a liberal conspiracy. Their theories cannot be discredited by historians because everything that they say is part of that conspiracy.

Think about it. If somebody came to you and said: “Hey, evolution is wrong. Here, in the Bible it says that the world was created in seven days, the world is 5000 years old…,” you would not believe him, right? Turboslavs see us the way we see creationists: essentially misguided people, who believe lies and cannot understand a simple argumentation that would lead them to the light.

Turboslavism, like any good origin myth, answers both deep hopes and deep fears of the society that beget it. The dream of “Great Poland” that has been respected and admired, and having an empire has never really left Polish collective consciousness. History books in schools are still full of it, even those well-meaning.

There is very little critical thinking involved. The idea is simple: since Poles have suffered so much in the last 200 years or so (and that is, to a degree, true, especially in the 20th century) there is no need to deal critically with the past. As if the last 200 years constituted a kind of collective atonement, which erased any “sins” that could have been committed. The word “empire” is still seen in a positive light in Poland. Polish colonialism on the eastern fringes is squarely ignored (or dismissed as not real, since those “colonies” did not lie over the sea). It is a very fertile ground for illusions of grandeur.

In this mindset Poles and Poland fulfill a divine historical mission (it is almost funny how close this right-wing fantasy comes to historical determinism) that is constantly foiled by Germany and Russia (and their previous incarnations). Turboslavism is just an iteration of that myth, with greater emphasis put on Germany as the enemy. It is also easier to believe and more difficult to disprove because it mostly happens in the distant past. That myth is also subtly racist - Poles are better, have almost divine origins, are “the martyrs of the world” and suffer for other nations. In the Turboslav ideology it is expressed by being descendants of Aryans (it is hard to ignore subtle Nazi parallels here, if you have doubts have a look at the logos and iconography on this blog).

The national inferiority complex also finds a therapeutic respite in the Turboslavic myth. It was all good before. We have been first robbed of greatness and then robbed of the memory of it. How can we be blamed that things are not going perfectly? We first need to reclaim our past and then we shall rise onto greatness again. (If only those pesky Germans will not interrupt us again!)

The Turboslavic ideology is also something more than just a fake origin myth. It is a very potent tool in the current political and ideological fight in Poland. History is very much at the front-lines here. Turboslavs have been adapted by various right-wing and nationalistic groups to serve their purposes.

Why? Because the whole ideology is like a candy bag for right-wing, nationalistic populists. It manages to be simultaneously anti-German (basically an essential condition in the current political climate) and nationalistic. It is cleverly anti-Catholic (the Roman Catholic Church is painted as the evil one here - and since pope Francis is way too liberal for most right-wingers in Poland, that plays nicely), although one has to say that the anti-Catholic rhetoric lies uneasy in some right-wing circles. Finally it fits just so magnificently into the “getting up from our knees” slogan of the current ruling party (hey, we had an empire! We don’t need your filthy German-European-Western-Liberal thing).

There are in Turboslavism strong paralles with past ideologies of this kind: Sarmatism (an idea especially popular in the 17th and 18th centuries in Poland, which linked the origins of Poles to ancient Sarmatians; one has to say though that although nationalistic, colonialistic and xenophobic, it presented a very different political and cultural program) and Panslavism (an idea heralding unity of all Slavs, in most iterations under the leadership of Russia). But make no mistake: Turboslavism is no mere continuation of those. It is something new and different.

What can be done?

Not much, I’m afraid. Turboslavism is not something that can be simply disproved on historical grounds. It is an ideology that appeared at the right place in the right time for the right people (you see what I did there, wink, wink?) This does not mean that we should not fight with it, explain and educate.

Adherents will take everything to support their views. For example, around a year ago the sea on the Baltic coast of Poland has uncovered remnants of a sunken forest, approximately 3000 years old. One short look in the comments section of the article reporting the discovery reveals that this forest is indeed a proof that the Empire of Lechia existed. The connection is tenuous at best even for the faithful, but that is not the point. For the adherents of Turboslavism, any find that predates the year 966 (the baptism of Mieszko) is a proof that their theory is sound. New coin hoard found in Western Pomerania? Lechia. Iron Age village found under planned highway? Lechia.

As such, Turboslavism represents just a very radical iteration of a bigger problem – the lack of true historical reflection among the wider public. How could that happen in a country that truly offers excellent historical education, and which is home to some first-class historical research? There are many answers to that question, but probably the key is the lack of quality public history and especially public medievalism in Poland. History in schools is taught in a repetitive and uninspiring way, which naturally leads people to see it as boring. This in turn primes them perfectly to believe, years later, that all that boring stuff that they learned in school was, essentially, a lie, and that a true, way more exciting history awaits.

Make no mistake: even though the “core” group of believers is relatively small, Bieszk’s books sell tens of thousands copies. People who buy and read them might be best described as “fellow travellers”. Challenged they will answer that yes, it all sounds a bit odd, but, you don’t know for sure, do you? Yes, I do…

Not so easy conclusions

Historians have a responsibility to counter such myths like Turboslavism. This is precisely the place where politics and history intersect. It’s a hard fight and a bit of a hopeless one, but one that nevertheless has to be fought. Especially now.