Hmmm. The Witcher and the expectation of the medieval

The thicket of non-linear storytelling that greets us in the first series of the Witcher can be extremely daunting. We jump between characters, locations and years. Cintra. Brokilon. Blaviken. Ciri. Stregobor. Calanthe. Yennefer. Geralt. Faced with this strange world presented in a strange way we desperately seek the familiar. We try to default to what we know, to a familiarity. We try to escape the uncanny.

For some this labyrinth of motifs, characters and locations was too much. Many reviewers dismissed The Witcher as chaotic and difficult to follow. The reviewers have told us that the Witcher is confusing and if it were so it was a grevious fault. While this critique is, to a certain extent, appropriate, it is mostly exaggerated and this exaggeration has interesting roots. To uncover them we need to go way back, back to where it all starts. 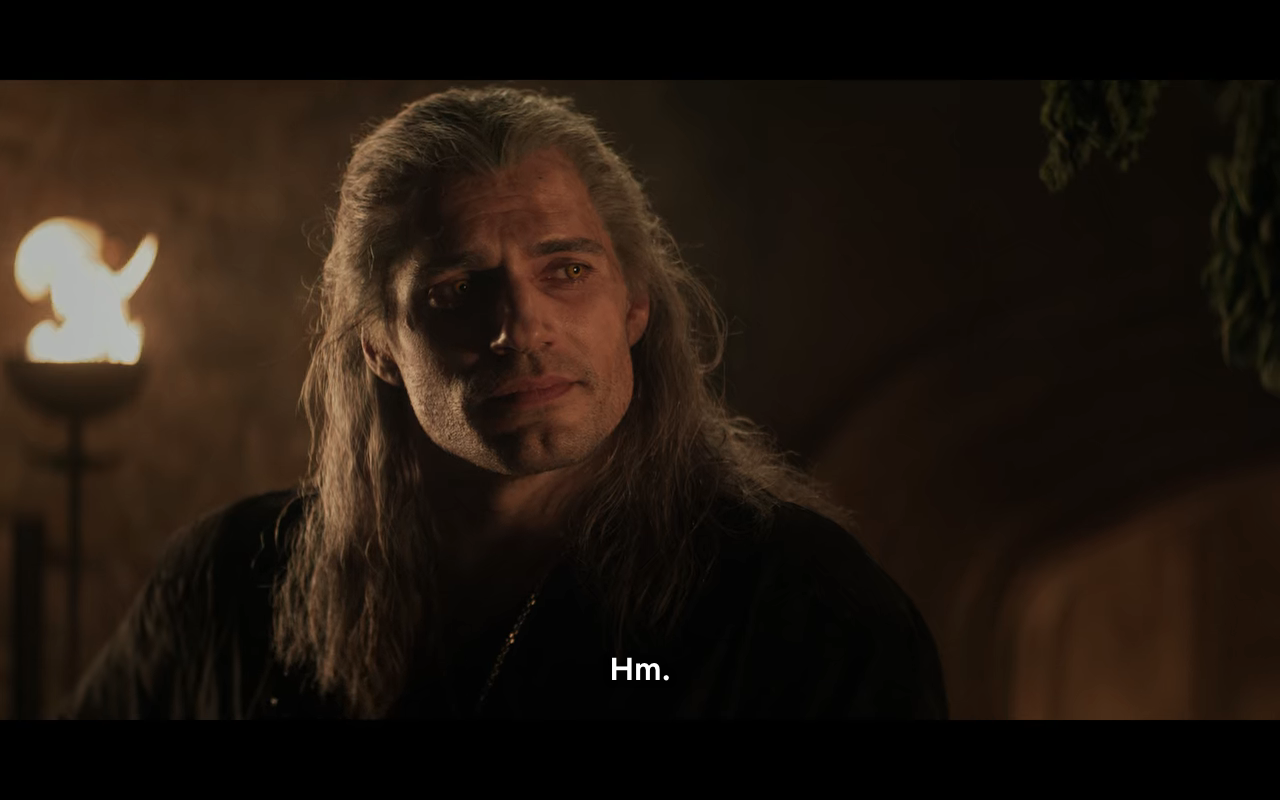 In 1986 Andrzej Sapkowski published in the Polish fantasy and SF magazine Nowa Fantastyka a short story entitled “Wiedźmin”, “The Witcher”. While the story was good, even very good, it was, at its core, a relatively straightforward narrative, with a light play on the not-so-happy ending. We will find a lot of this story in the episode 3 of the Netflix series, entitled The Betrayer Moon. While the short story might have been conventional in nature, it has started a literary phenomenon in Poland. Sapkowski started writing more short stories, that were later gathered in two books, The Last Wish and The Sword of Destiny and a 5-piece saga, telling the story of Geralt the Witcher and Ciri roaming the Continent in an epic play with fate. The Netflix series is an adaptation of those books and not, as many reviewers have mistakenly thought, the very successful game series based on them and developed by CD Projekt.

While the first story might have been relatively conventional as time progressed Sapkowski developed a world full of subversive references, creative anachronisms and surprising narrative choices. The first of the two books containing the short stories is structured like frame-tale novel, reminiscent of the great frame-tale epics like Jan Potocki’s The Manuscript Found in Saragossa. This arrangement, similar also to medieval examples like Chaucer’s The Book of the Duchess is quintessential to our understanding of the narrative itself. The whole point of this structure is to get lost in the story, but be excited by subversive, but easy to follow adventures of Geralt found in the individual “drawers” between the gaps in the frame narrative. What the creators of the series have tried to achieve is to emulate this feeling in the language of screen: the confusion that we experience, the jumping back and forth (inspired, as Lauren S. Hissrich admitted, by watching Dunkirk) strengthens the feeling of the uncanny. This is a very medieval device, which, while on the surface confusing, when deployed properly can actually help the suspension of disbelief. While one cannot say that this experiment was a full success it, by and large, worked out in the season 1. Eight episodes are perhaps too little time to execute it but it does emulate the feeling one gets when reading Sapkowski’s short stories while at the same time introducing all the major characters in a relatively rapid succession. It might be a shortcut through mushrooms in its execution, but we do reach the main road at the end.

We have been conditioned to expect “medieval” when watching a “fantasy” series. We are ok, fully ok, when a dragon burns a city, but we will snicker at the tiniest detail that does not fit with the “expectation of the medieval”. Remember the debates about casting of The Witcher? The discussions about the possibility of presence of the POC in a fantasy series? Apart from this reaction being racist and, plainly speaking, logically incoherent, it has to do with how we imagine the Middle Ages to be. They are to be dirty. They are to be ethnically and racially coherent and white, with the exceptions to that rule being only allowed as the Others. They are to be primitive in their social organisation. They are to be brutal and driven by religious fervour. Sexually prude. The stories told about them are to be heroic, masculine, and straightforward. None of those postmodern chopped narratives and literary devices. My, my, my, what a shame the Middle Ages where none of those things. Why then so many of us believe in Middle Ages that are like that and expect their emanation, the fantasy series, to adhere to those expectations? Because we were conditioned that way. While the list in the previous paragraph has very little to do with the Middle Ages it does square with how the Early Modern and Modern worlds thought about the Middle Ages. The post-Reformation, then post-Thirty Years’ War, and finally the 19th century literature created such image of the Middle Ages and it is so deeply rooted in our aesthetic expectations that we are ready to accept anything adhering to it as medieval. Even the inevitable comparisons to the Game of Thrones, which while based on the perception of the medieval was actually also a “Early Modern” series, are based on this very assumption.

Sapkowski’s work is devoted to overturning those assumptions. It is full of everything that one does not expect from a fantasy series. In its linguistic layer, almost entirely lost in any translation that I had a chance to read, it often plays with the language of Henryk Sienkiewicz, known in the West for his epic Quo Vadis, which earned him the 1905 Nobel prize. Sienkiewicz wrote a series of historical novels where the characters often speak a form of anachronistic pseudo-antiquated Polish, a style which he though represents well how “historical” people would speak. Sapkowski parodies this style in many of his secondary characters. While for the Polish audience the joke is immediately clear, it is almost impossible to catch for the English-speaking audiences.

The Witcher novels are full of creative anachronisms, subtle almost-breaking of the fourth wall (so brilliantly reflected in Jaskier in the TV-series, who is almost on the verge of doing it, but actually never does) and allusions to the modern pop culture and politics. But this, you will say, is not medieval! Well, it kind of very, very much is, we just do not expect that. Reflecting the past through own pop-culture is very much a medieval thing. Just look at the miniatures in medieval manuscripts depicting the events of Iliad and Odyssey, like this siege of Troy from Rylands MS English 1. Everyone in late medieval armour!

Or think about the Old English retellings of the Biblical Book of Judith, the poem Judith preserved in the same manuscript as Beowulf, London, British Library, Cotton MS Vitellius A. XV. Or the amazing statue of St Maurice in medieval knight’s armour from Magdeburg. The examples are numerous. By subverting the expectation about the depiction of the past the Witcher does something very medieval in nature. Cool, isn’t it?

Now, the series did not succeed wholly on this front. But there are some amazing subversive moments. Marilka explaining to Geralt that she will do everything to escape Blaviken. Queen Calanthe’s snark on feudalism. The miners in Temeria planning a strike, because their king is a piece of garbage.1 The sharp critique of the realities of the postcolonial world in the encounter with the Elves. Even the ironic depiction of what it means to be an archaeologist.

Geralt in the books is much more than an antihero. In a way Geralt manages to be both Beowulf and Grendel. The monster-hunter and the monster, in one person, forcing us to ask why are the monsters hunted and who are they? He is a monster and its critic simultaneously. This play on expectation of the hero, central to the books, was hinted in the show, but I think not yet fully developed. I had my doubts if Henry Cavill could pull it off, but hmmm, I think he can.

A lot of reviewers expected the series to be an adaptation of the games (which are much closer to the “expectation of the medieval”), with a touch of the Game of Thrones aesthetic to it. And expecting that they were put off by what is an interesting experiment to speak non-English literary fantasy language on screen. Paradoxically, Netflix’s The Witcher is at its weakest when it tries to adhere to this aesthetic. The siege of Cintra is way too close to what we would expect in an episode of the Game of Thrones and it looks off, almost out of place. But those are minor hiccups.

The creators of the show sometimes gave themselves too ambitious goals, stumbling in their pace, making the screen translation of the literary-frame tale too clumsy, compacted in too short a space. But boy am I happy they have tried. I would have wished myself even more play with the “expectation of the medieval”, even more allusions to the current politics. Because you can do that in a monster-slaying show, as everyone who read Beowulf can tell you.

Now, The Witcher is a lot of silly fun. The chance is, a very small part of the audience watches it for references to medieval social structures or for a recreation of frame-tale narrative techniques. But the point is that because those elements were included in the show it makes this sword-slashing, dragon-slaying, spell-casting show more interesting. And with the right amount of subversiveness in the future The Witcher has a chance to become a great series, maybe even influencing our “expectation of the medieval” in popular culture. We will soon stop jumping between Blaviken and Cintra and hopefully have a bit more time with our characters. But this chaotic structure also managed to fulfill its purpose, it managed to convey to us a certain uncanny quality of this world, made it maybe even a bit more believable as a fantasy. Will that be enough, time will tell.

Fafinski, Mateusz "Hmmm. The Witcher and the expectation of the medieval." History in Translation (blog), 05 Jan 2020, https://mfafinski.github.io/The_Witcher/.