During the IMC Book Fair I have spent an astonishing sum of three pounds on a battered copy of Philip Whitting’s Byzantium. An Introduction. Why, you may ask? It is fairly outdated, very cursory, short and has been out of print for at least thirty years. If you google it you will find just a couple of references to it. For anybody who has Ostrogorsky’s History of the Byzantine State on the shelf it can only be seen as a handy introduction to students (if even that). The book on 178 pages gives an overview of Byzantine history in seven chapters, aimed mostly at the wider public. And yet, in light of the #publicmedievalist debate I want to highlight two things that this book does just right.

Turning your world upside down

There are always two maps that precede each chapter. One is a fairly straightforward outline of Byzantine borders at the time that is described by the chapter. But the moment you flip the page a much more interesting map appears. It always describes a particular phenomenon that occurred during the timeframe (for example the rise of Islam, or the trade routes). What is important is that the map is turned - the north faces left and east is at the top. This little move1 does more to decolonizing the way a reader might look at the Byzantine Empire than a lengthy essay. Suddenly the region makes much more sense. The geographical positions of places like Constantinople are no longer peripheral. The eastern Mediterranean looks much more like what it was - a connection platform and not a barrier. The Byzantine world looses suddenly its fake position as a fringe of the West that can be found so often in historical maps. The cherry on top? Look at the Madaba Map from the sixth century - it is also oriented with the East on top (sadly the editors missed that point). One small flip for the map maker, one giant leap for the understanding of the Eastern Mediterranean.

We should flip our maps more often. 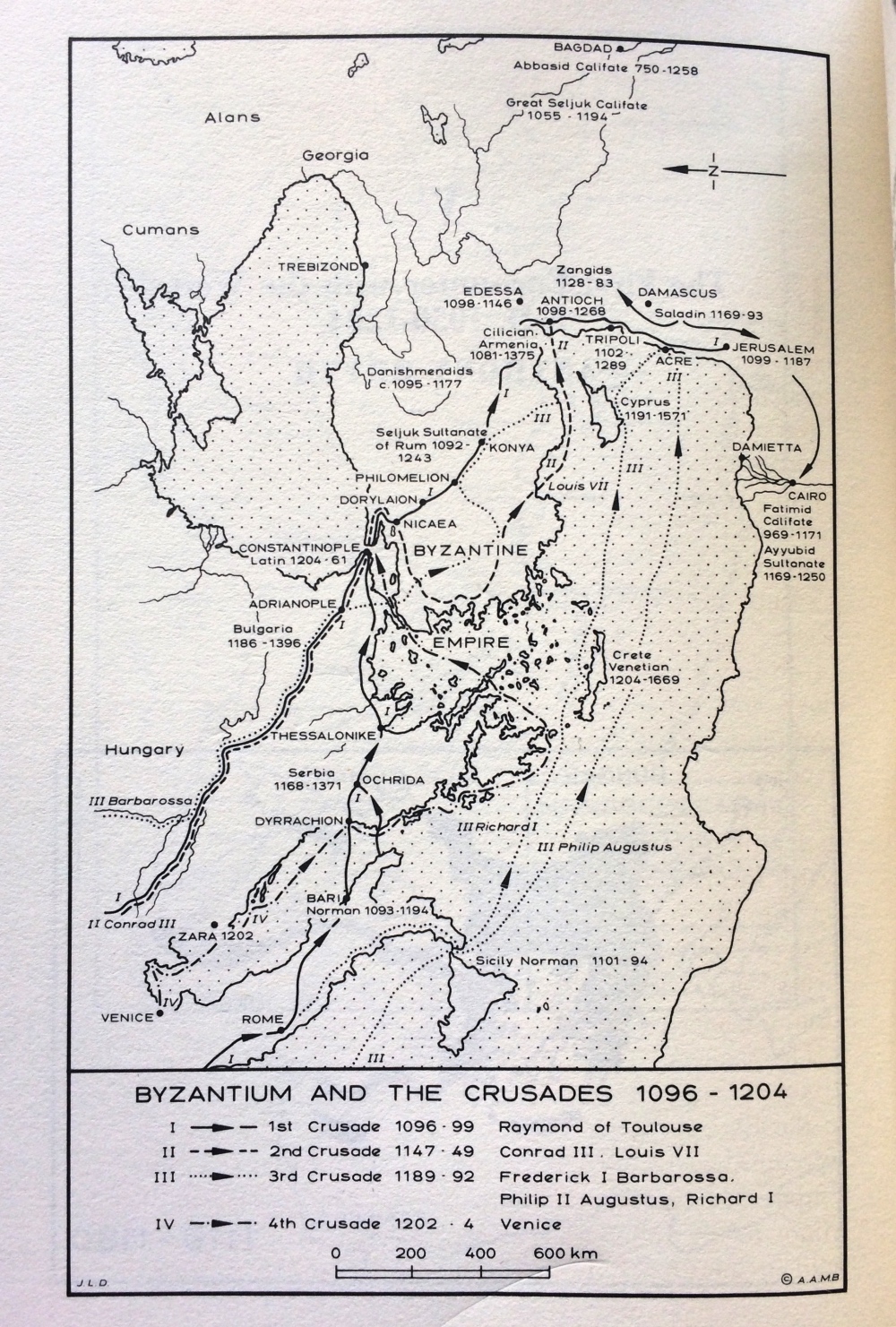 As much as the maps are a nice touch - it really helps in presentation of the topic another element of the book is much more important. It is a popular publication - it actually spurred from a series of radio programs; and yet each chapter is written by an eminent academic of the time: Cyril Mango, C. E. Stevens, Donald M. Nicol to name a few. The chapters are short and written for a wider audience but at the same time there is a weight of scholarship behind them.

During the #publicmedievalist debate at IMC we have talked at length about penetrating the barrier with “popular history”. At the same time we acknowledged that it is difficult (if only because of the time constraints) to write popular history AND research.

Well, here you have a possible solution to that problem: we should write collaborative narratives. It is much easier to find time to write a short chapter (not that different from a blogpost) than a whole popular book on the subject. There are multiple options for making this kind of work published both in print and on the internet (I have to say, after IMC, I am really thinking of you Kismet Press and your Epitome series!) We could really make that happen! It will give us a powerful tool in the future. It can serve as means to empower younger scholars. It can help to bring new, challenging views to the wider public.

Writing collaborative narratives can allow us to cover large topics much faster. It will also help us to develop common strategies in respective fields and last but not least help to exchange our views and get to know others in our respective fields.

And please, let it have flipped maps.

p.s. Just a short note: with this post me and History in Translation enter the wild world of Twitter under @calthalas Huge thanks to all the kind souls at IMC who encouraged me to do it!