The Late Antique Minas Tirith - a Story of a Remarkable Object

We start, as befits the period, in medias res. In 435 Theodoric I, rightly judging that the Romans will be busy fighting with the Franks on the Rhine, rushed to lay siege on Narbonne, a crucial city in the south of Gaul. His plans were foiled as the siege was lifted by Litorius, magister militum per Gallias with the help of the Huns. We have a brief poetic depiction of that scene by Sidonius Apollinaris, a 5th century poet, diplomat and bishop. Sidonius, always a toady, tried to give Avitus, then still a young commander and diplomat but later Western Roman Emperor, all the credit for lifting the siege:

He [Theodoric I] had surrounded Narbo,

and it was enfeebled with wasting famine

(thou wert then a child [Theodoric II]):

hemming in those panic-stricken thousands

he had all but driven them to eat of loathsome things,

and already he had begun gloomily to think

that some of his due spoil would be lost

if haply the besieged perished within,

when he gave ear to my [Avitus] advice,

and withdrawing his arms relieved the walls

As much as this is a nice piece of propaganda, it does actually describe an event that did take place. Avitus might have even played a role in it, helping to negotiate peace with the Goths, but the siege was broken by Roman troops under Litorius. It also gives us a feel about the desperation of the besieged and their jubilation when the relief has finally arrived.

There is, however, an object which can help us feel all those emotions even better. It is approximately 45 cm high and 23 cm wide, carved out of boxwood sometime during the 5th century and currently on display at Bode Museum in Berlin. It is also one of the most mysterious pieces of late antique sculpture. 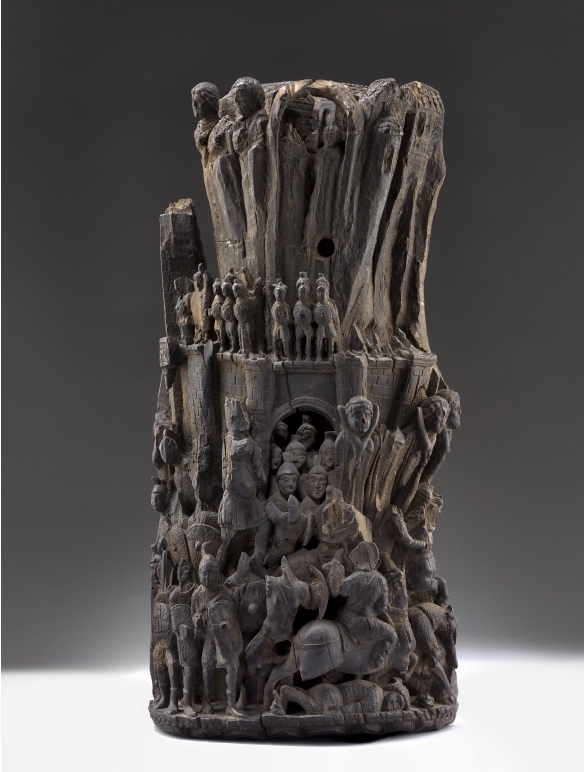 Look closely. The action unfolds. On the left a Roman relief force arrives, possibly being led by the tall figure which now lacks a face. One of the soldiers sports a labarum, a military standard with the Chi-Rho symbol. The battle is already won, the besieging force is beaten and routed. “Barbarians” on horseback flee in terror, trampling some of their own. 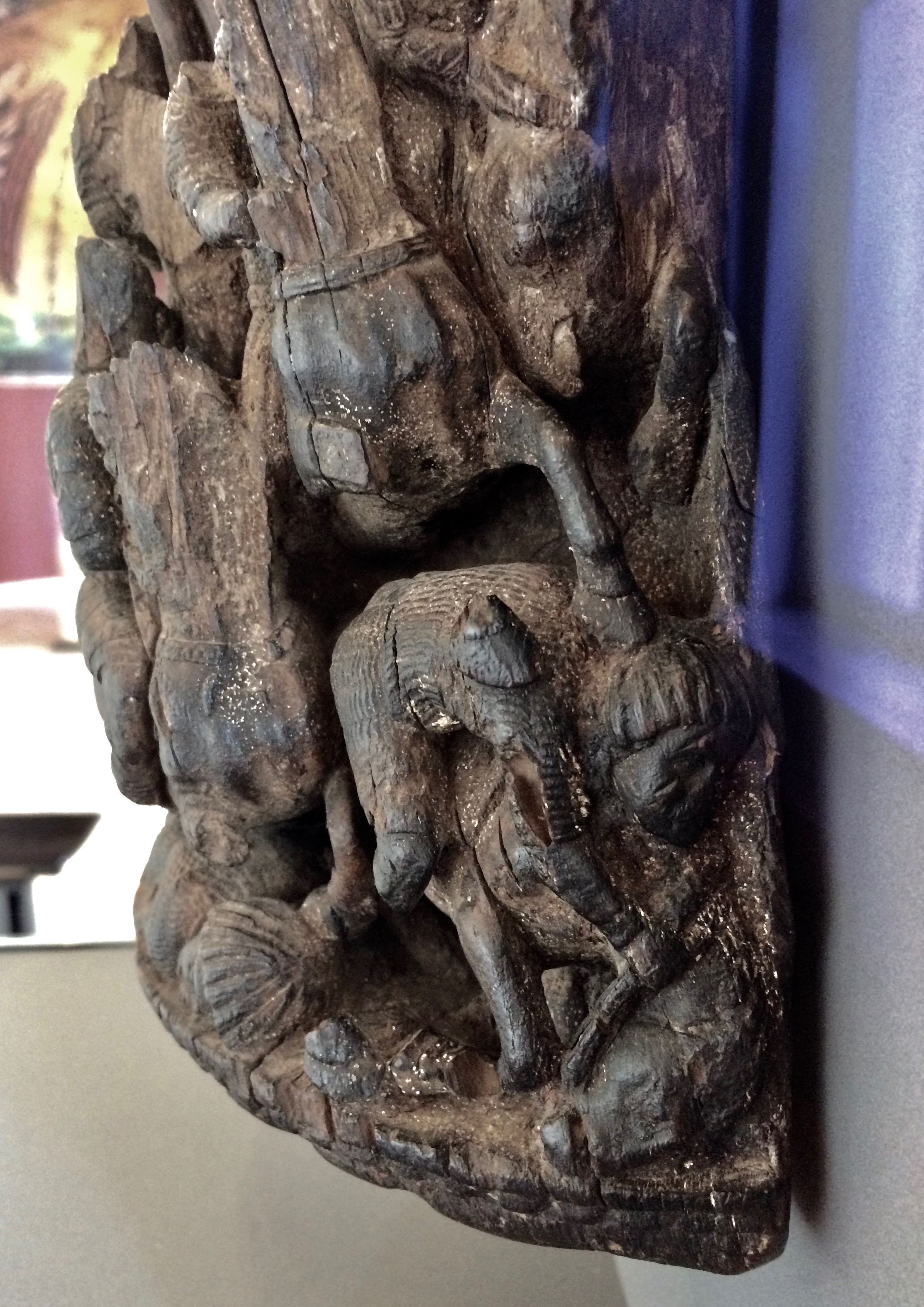 The garrison of the city lines the walls (possibly looking out for the relief force) but is eager to join the fight. The gates are opened and some of the defenders join the pursuit. You can just about catch a hint of a smile on the face of the Roman soldier on the right side. He is winning! (Well, he is probably happy that he will not have to “eat of loathsome things” as Sidonius would have put it…) 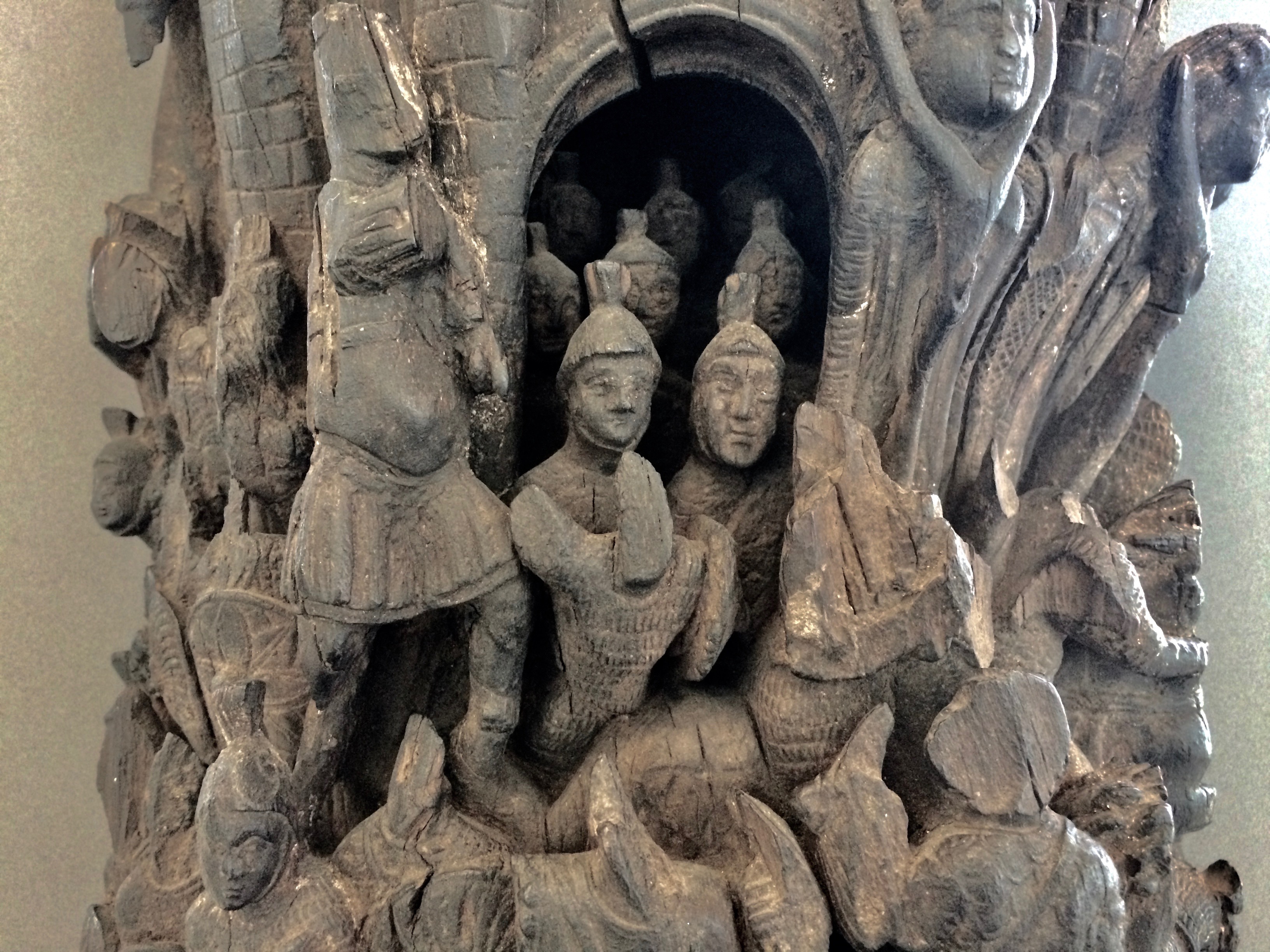 But war, war never changes and is still a bloody business. Some people have been executed, we can see their corpses hanging on wooden beams. Who are they? They must be of high status, their heads are adorned with diadems. As the time axis seems to progress from left to right we can assume they might be the barbarian leaders. But maybe their bodies hung the for a while? Maybe they are traitors? 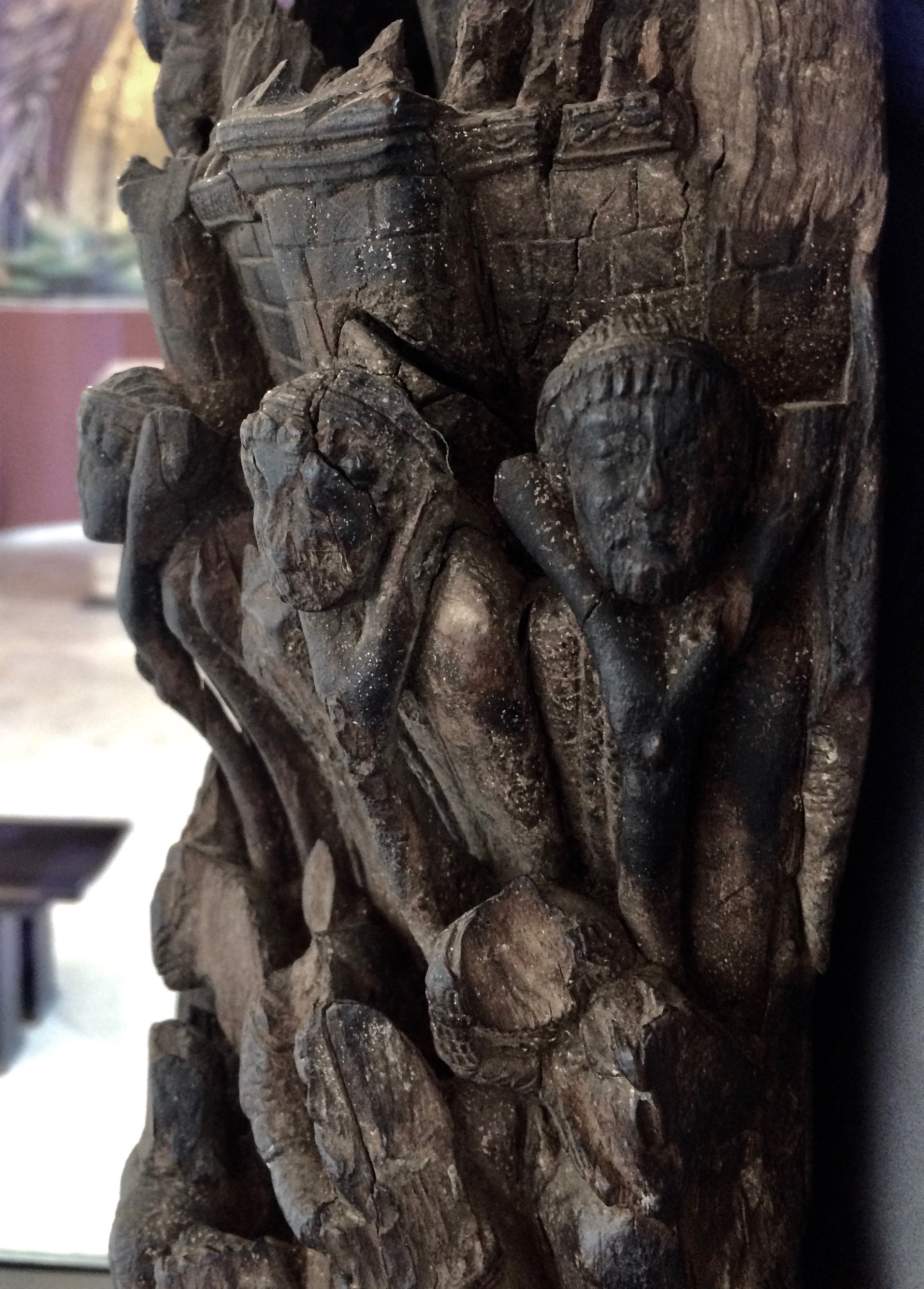 Higher up we can, through an arch, catch a glimpse of the city proper and its buildings. There, on the right, the structure with an apse could be a church. Above the walls we see tall figures that look like elders. They might be the leaders of the city or the protector-saints that have taken care of the defenders. Now, content, they gaze upon victory. This part is missing the front columns that would have obscured the view but maybe also included more figures representing the civilians. 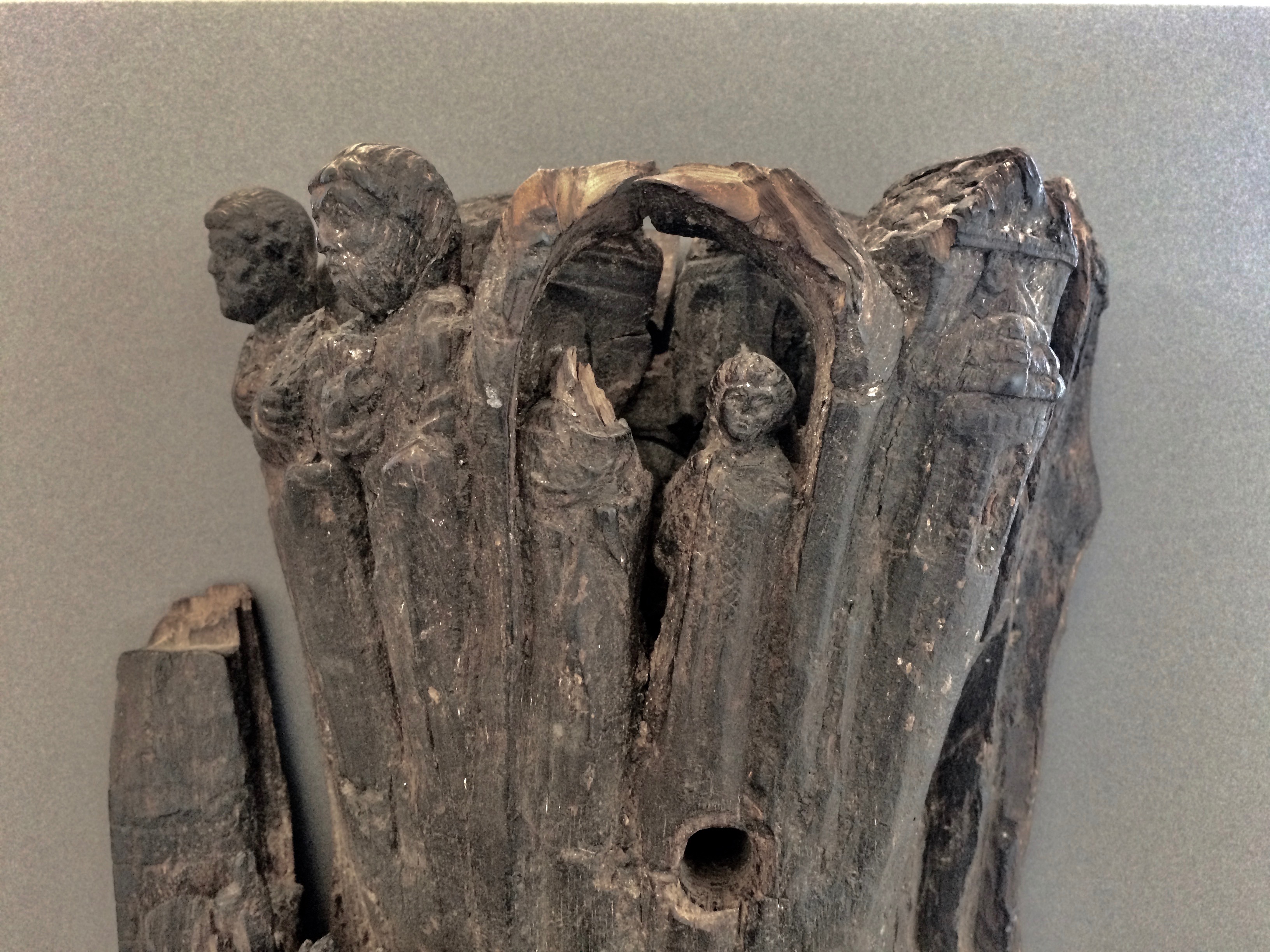 This extraordinary piece of sculpture, full of action and symbolism, was probably originally hanging on a wall and constituted a part of a bigger assemblage. It most certainly doesn’t depict the siege of Narbonne. But what does it depict?

It is, not surprisingly, a mystery. The piece, acquired by the museum in 1900, has up until recently been identified as coming from the eastern part of the empire (even as possibly Coptic in provenance). But on style grounds (such as its similarity to the late 4th century sarcophagus from St Ambrogio in Milan or the 5th century mosaic in Sta Maria Maggiore in Rome) it has been quite recently found to be much more likely to originate in the West.

Is this a real event? Quite possibly. There are indications that although highly stylised it could be a commemoration of one of the real siege liftings. But there is not enough specifics in the piece to match it with any of the ones we know from written sources. It could also be a biblical scene, with the faceless figure being Joshua, rescuing the city of Gibeon (Joshua happened to have hanged the five kings of the Amorites on trees after victory - they might be the ones on the right side of the relief). It could be both! A real event thinly disguised in the biblical context. Just like the poem of Sidonius2 it would then be a full of flourish way of showing the leader of the victory in the most positive light possible by equating him with a hero from the Old Testament.

Even the identification of the enemy as “barbarians” can be challenged. This is a very fluid term and might have been used a bit too lightly in the old interpretations. Who is and who is not barbarian is a complicated matter and often lies in the eye of the beholder. The retreating army might be, for example, a party in a civil war. The relief force could have mostly been “barbarian”, as the example of Huns present at the lifting of the siege of Narbonne shows.

One last cultural note: when I look at it what comes to my mind is Minas Tirith from the Lord of the Rings and the moment when the victorious Aragorn and the Grey Company, together with the Rohirrim, rout the last of the Mordor invaders. I doubt Tolkien had a chance to see it, but the vertical arrangement of the city (here made for practical and artistic purposes) and the story in the scene do bring to mind the capital of Gondor and the final act of the Battle of the Pelennor Fields.3 For me, and I know that this can spark a dispute, Minas Tirith is quintessentially a late antique city.

Fantasy literature references aside, this piece can also serve as a metaphor of late antiquity. It is full of action, a movie encapsulated in a wooden relief. Extraordinary in the way it portrays the affair, multilayered, symbolic and at the same time referring (probably) to a real event. But first and foremost it is still mysterious, for there is much we still need (and can!) discover about this amazing period!

Riess, Frank. Narbonne and Its Territory in Late Antiquity: From the Visigoths to the Arabs. Routledge, 2016.

Weitzmann, Kurt, ed. Age of Spirituality: Late Antique and Early Christian Art, Third to Seventh Century: Catalogue of the Exhibition at the Metropolitan Museum of Art, November 19, 1977, through February 12, 1978. New York: The Museum, 1979.